The goal of Angular components is to be completely independent. This can lead to mismatch of displayed data where one component isn’t in sync with what other components are displaying. One solution is to have a stateful service shared among all components and delivering global data. This can be problematic when multiple pieces have to be globally accessible among multiple components. In this situation, the need for a global state becomes inevitable.

Global state has had a bad reputation since inception due to its unpredictable nature. About two years ago, Redux was introduced as a way to manage this unpredictability by making the state immutable and operations acting on the state synchronous and stateless (a similiar approach can be found in the actor pattern). Since then, its principales has inspired multiple implementations, one of them being the Ngrx store for Angular. Today I will go through the library and build a sample application demonstrating how Ngrx store can be used to share a global state and deliver continuous updates. This post will be composed of 5 parts.

Our example will be a profile selection. We will have a list of users and on selection, the display will show 2 sections, the user profile and the groups of that user. 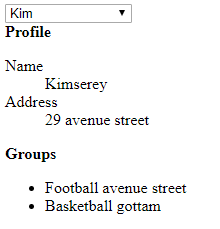 Adding a global state using ngrx store is composed by multiple pieces. Some actions defining how the state will be changed, some reducers which are stateless functions “reducing each values of the action payload onto the state”, some effects which are used for side effects, like api calls, based on actions produce more actions and lastly the selectors for the views.

The effects are optional but in this sample we will be using it:

Lastely the devtools are also optional but I recommend to install them, it will make debugging easier:

Also from Chrome extensions, we can install the Redux DevTools which allows us to visualize the state and all actions which happened in the system.

The actions define what will change the state. In our sample, we will have the following actions:

Since loading the values will access an external resource, like an API, we need to cater for failure. Now in code, an action is defined by a type and a payload where for example Select user will be the type expressed by a string constant and the user Id will be the payload.

And similarly for the groups:

The reducers are the handlers of the action. They take in the actions and apply the values of the action payload to the state. Our state will be composed by two parts, the user state and the group state which will both hold the users and the groups.

For the users, we will hold all user profile.

The reducer will take the actions we defined earlier:

A reducer takes a state in and an action which it will reduce onto the state. Here when we receive a load profile success, we set it to the state and reset the failure boolean.

Similarly for the group reducer, we hold a list of all the groups the user is part of and a boolean indicating failure.

There is only one reducer in the app, therefore for it to work, we will combine the two reducers into a single reducer. We do so by creating a combined reducer in a barel index.ts.

combineReducers is a function provided by ngrx store which will direct the correct actions to the correct reducers allowing us to have a clearer code separation.

Lastely we can now register our reducer with the import of the store on our app module using StoreModule.provideStore(reducer).

Notice that I also imported the devtools StoreDevtoolsModule.instrumentOnlyWithExtension().

Effects handle actions and allows to publish other actions. They can be used to make calls to APIs and to dispatch appropriate actions based on the result. Essentially we would be calling services within the effects. Let’s start by creating an example service:

Our first effect will be to load user profile when selected:

The effect class will receive a list of all actions which we filter with .ofType. We then use toPayload given by ngrx effects to select the payload of the action and we .switchMap to the Observable given by getUserProfile(). This in turn produces either a success or failure action. The flow .ofType.map.switchMap is very common and can be found in a lot of other samples.

Similarly for the group effects:

Lastely we can import the effects by adding it in the app module with EffectsModule.run(XXXEffects).

For example we would need to select the profile from the state. We start by adding the selector in the user reducer file where the state can be found.

createSelector is provided by reselect.

Doing so allow us to select a specific piece by creating dedicated selectors. We can then move on to create the views starting from the containers. We start by creating a select-user container which will provide a dropdown list of users.

When selected, we will broadcast a select action and the state changes to all parties interested with store.dispatch.

This in turn will trigger the effects which will update the state in the reducers. We can then create a profile container, which will subscribe to the profile state.

In order to get a piece of the state, we use store.select passing it the selector we created previously. .select() is provided by the store, it is important to no confuse it with the Observable.select as this store.select will not trigger if the new value is equal to the previous one, meaning on update of the state, this piece will only trigger if the profile is changed. This container handles the asynchronous portion of the state and extract the result to pass it to a simple component app-profile defined as followed:

This component takes the profile as input which allows to remove the Observable and async handling. And that’s it, when the user is selected, the changes will be propagated to the profile. We do the same for the groups which I’ll leave to you!

The full source code is available on my GitHub https://github.com/Kimserey/ngrx-store-sample

Today we saw how we could manage global state and side effects thanks to Ngrx Store. Managing state has been a problem for some time now, with application growing in complexity on the browser, Ngrx Store definitly helps by bringing a predictable way of updating and sharing global state. Combined with the effects and the devtools and the power of Observables, it is the right tool to handle state in big projects. Hope you like this post, if you have any question leave it here or hit me on Twitter Kimserey_Lam. See you next time!