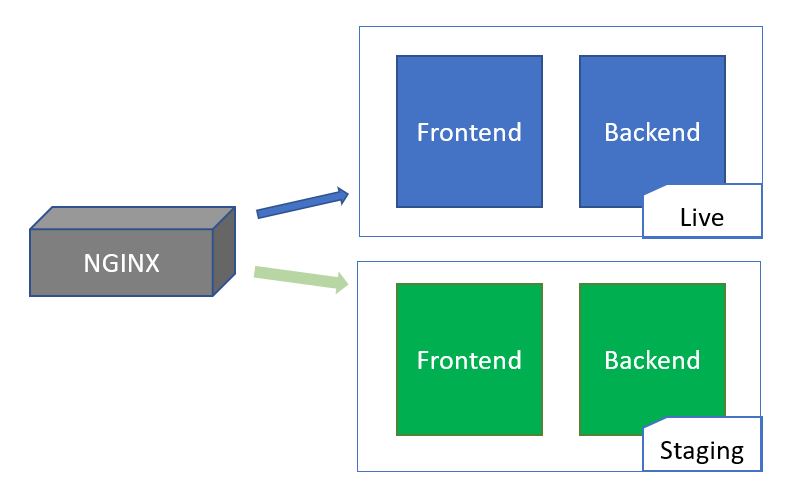 Blue-green deployment is a method used to reduce risk and downtime during deployment.

When we want to release, we then swap the environments, staging becomes live and vice versa. If any issue surfaces, we can act quickly by swapping back and we are back to the original live environment prior deployment.

As we can see, we have four important environments, blue, green, staging and live:

At any point in time, blue or green can become the live or staging environment. We also define that:

The application that we will be deploying is a static HTML frontend with an ASP NET Core backend.

Nginx comes with the concept of sites-available and sites-enabled. sites-enabled are simply symlinks pointing to configurations from sites-available. Using the upstream directive and proxy module, we can produce the Blue-green setup effect where we:

When we need to swap traffic, we overwrite the current upstream symlink with symlink containing the opposite upstream. Let’s see how this can be done. In the following example, I am using my domain called notkimsereylam.xyz.

We start by creating two Nginx configurations, one for the live system /etc/nginx/sites-available/live:

And one for the staging system /etc/nginx/sites-available/staging:

We then create the first upstream configuration where blue is live, we call this configuration blue, /etc/nginx/sites-available/blue:

And similarly for green, /etc/nginx/sites-available/green:

In this case we only want one upstream symlink so we create a single symlink:

Lastly as the frontend files are static files, we use Nginx to host the static files and create two frontend:

Swapping can now be done by simply overwriting upstreams with either blue or green.

For the ASP NET Core backend, we prepare two Systemd units, one for blue and another one for green. We first copy the published .NET dlls under /var/www/blue/backend and /var/www/green/backend and make sure dotnet runtime is available.

Then we create the unit for /etc/systemd/system/backend-blue.service:

And then the unit for /etc/systemd/system/backend-green.service:

We then enable both and start both:

The last step is to figure how to automate the deployment and always deploy onto staging while enabling manual swap. We will do this next with GitlabCI.

We start first by defining our stages in a .gitlab-ci.yml configuration:

We define three stages, the first one will be to package both frontend and backend, the second one to deploy from our CI server to our production server and the last one will be to swap staging and live.

Next we define the job to package our backend. For that we will use the microsoft/dotnet:2.2-sdk-alpine image which is basically alipine with dotnet SDK. We start first by installing zip and we then publish with dotnet publish and zip the resulting output. We then specify that the artifact to be pass down to the next stage is the backend.zip.

Similarly we package the frontend which is simply a copy of the static HTML files:

For the two previous stages, we target shared runners from Gitlab whih have docker installed.

For deployment stage, we use our own CI server with a Gitlab runner installed.

We can define our own CI Server by installing gitlab-runner on an ubuntu server and registering a runner by following the CLI wizard.

From Nginx Frontends configuration, we can see that we have defined a special path called /deployment_id. This path is used to identify the current environment used in live and staging. This is useful for debugging and it will be used here to decide which environment to overwrite as https://staging.notkimsereylam.xyz/deployment_id will tell us which environment is currently the staging environment.

Provided that we have setup ssh to allow connection to our production server, here my server is called notkl (notkimsereylam), the script to deploy the frontend then becomes simply:

In order, the scripts does the following:

For the backend, we only need to add the step to restart Systemd as the backend is Kestrel managed by Systemd. The whole deploy stage then becomes:

And lastly we implement a swap job which will swap environments between live and staging by replacing the previous upstreams symlink with the new one and reloading Nginx. This stage is set to be manual with when: manual. We also specify that it has no dependencies with dependencies: [] so that the artifacts wouldn’t get downloaded as they are no longer needed.

And here is the complete yaml file:

And we endup with a complete Blue-green deployment setup with automated deployment!

Today we saw how to get a Blue-green deployment setup using only Nginx and GitlabCI. We started by defining the different configurations necessary to enable two environments to be available on production server and we saw how to swap from live to staging using symlinks. We then moved on to setup GitlabCI to get a fully automated deployment which will deploy to the staging and allowing to swap staging with live if we need to promote it. Hope you liked this post, see you on the next one!