The OpenAPI Specification (OAS) is a standard describing the interface of restful APIs. It provides a way for developers to understand quickly the functionalities provided by an API, and also provides a way to automate tasks around discovery, testing and also generation of client SDK in multiple languages. Each language plus web framework combination provides some sort libraries enabling auto-generation of the OpenAPI specification, for example in DotNetCore we have Swashbuckle.AspNetCore or in Python with Flask we have Flasgger. Today we will take the opposite idea to auto-generation and craft the specification by hand. The technology agnositic aspect of the OpenAPI specification makes it an incredible tool to design APIs and brainstorm at the interface level prior writing a single line ofe code. We will look into what constitute a specification and how we can arrange the specification in a human friendly way.

The specification can be written either in Json or YAML format. For readability we will use YAML, but we will see later how to combine both YAML definition and Json. The specification is recommended to be named either openapi.json or openapi.yml.

Each of the properties can be found on the specification, the main structure is defined by the OpenAPI Object where required fields have a description starting with REQUIRED. Each property has a corresponding schema available:

If we paste the specification in the Swagger editor, we will get the following UI:

In this example we have described an API called My API with a single endpoint GET /values abd specified a single possible response 200. By default the Swagger UI will use the current host as the host for all request.

The main content of the API can be defined under paths. Paths is an array of Path Item Object.

Under a path item, the supported HTTP methods can be specified with a schema of Operation Object.

Let’s say we were to design an API which would allow to interact with values. Where each value with have an identifier and a value. We would be able to:

A complete specification example would look as such:

This specification provides the definition of the endpoint:

we defined tags to group the endpoint under a category and we defined a requestBody and responses.

RequestBody defines the body of the POST request. The content property is a map with media type as key and Media Type Object as value.

In this example, our restful API Values only deals with application/json format therefore we only specify a single media type. The media type object then expects a schema which defines the schema of the request body.

A schema is a subset of Json Schema. Some of the properties are taken directly from the json specification while other properties were readjusted for the purpose of OpenAPI.

Lastly the responses defines the different response of the path, with a map taking as key the status code and with value a Response Object then just like the resquestBody, it exposes a content, a map of media type with Media Type Object.

GET /values and GET /value/{id} return Json values of almost identical schenas. This is a common behaviour of APIs where endpoints might return objects composed of other objects themselves retrievable through other endpoints.

In this situation, we can use components to abstract the schema definiton of the value.

Then from the paths, we use the reference keyword $ref and reference the component within the document by prefixing it with #/.

Parameters, request body, responses and examples can also be shared under components.

And we can then reuse the schemas, parameter and examples defined in components.

Components also specifies the authentication mechanism available in the API under securitySchemes which is a map taking as key the name of the scheme and as value a Security Scheme Object. For example the description of an API protected behind a JWT bearer token would be:

Then under the path we can specify the security.

Bearer refers to the key specified under securitySchemes and the empty array [] is meant to specify the scope requested for authorization. The scope are used in OAuth 2.0 context, for Bearer authorization it isn’t required.

We saw how $ref could be used to reuse definitions of parameters, schemas or examples defined under components. But $ref can also be used to reference files containing specifications and/or also URI. Our example has grown to be a specification of about 140 lines even though we only 5 endpoints, we can imagine how a specification grow in proportion to endpoints added. To keep the specification easy to maintain, we can break specification in pieces where Reference Object can be used, Path Item Object and Schema Object.

We can then remodel our specification as such:

-c-1 disables the caching so that our YAML configurations would be cached. We can then split our files and use $ref to reference the API. We start by openapi.yml:

Then we have the schema my-value.yml:

One of the benefit of splitting the files is that it allows us to choose between YAML or JSON, we could create my-value.json:

This schema can then be used to validate the properties present in the schema using a JSON Schema validator. Lastly we define the paths:

We define the reusable components as part of values.yml so that it can be reused across the file. And that completes today’s post. 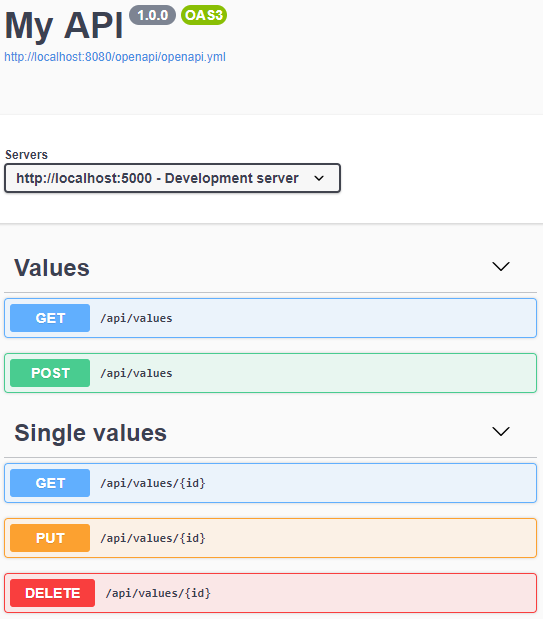 Today we saw how to define an OpenAPI Specification in YAML. We started by looking at a basic structure, where we then dived into how to configure Path Item Objects, Schema Objects and Component Objets. We then completed the post by looking at how we could download the Swagger UI locally with the latest version and supporting the latest specification version. The OpenAPI Specification provides a powerful way of expressing our intent when designing APIs prior writing a single line of code. And knowing its specificities opens a lot of possibilities for expressing requests, responses and examples that isn’t apparent when using autogeration libraries (one of the points at the heart of the debate of code-first vs schema-first). I hope you liked this post and I see you on the next one!