Looking for a specific post? Checkout the Blog Index.

The Python shell is a powerful tool to discover modules, test functionalities, and test our own application. IPython is an implementation of a python shell which provides enhancements over the original one. IPython is one of those programs that always have a space on my terminal tabs when building features for applications. In fact, it has become so important that it is now part of my workflow when working with Python. Today I want to share some of the functions and modules I use the most in order to iterate quickly on programs.

Starting from the most basic functions, dir and help.

We can see after importing math, it is now in global scope and we can then display the scope of math:

Using dir on classes will return the attributes of the class and of the base classes.

While dir on an instance will return the class attributes, plus the instance attributes, like name in our example:

Another important build-in function is help. Help will print the help page attributed to the object provided as parameter.

Inspect is another nice module allowing us to inspect different aspect of a module, function or class.

Inspect.getmembers(object) is similar to dir, with the advantage that it provides the type of the member:

We used getmembers to print the members which do not start with a leading underscore. With Python, all source files are accessible. This has the advantage of allowing anyone to look in more details on the underlying implementation. Inspect provides a function getmodule which allows us to know the exact module the object is coming from.

We can see that the object exposed by flask is a LocalProxy which can be found in Werkzeug code defined in /local.py.

For example, %pdoc will display the documentation just like help.

%pdef will display the function definition and its signature:

But also question mark {object}? will give details on the object:

Another great command from IPython is %run which allows us to run a python file from within the IPython Shell and dump all the content of the file in the global scope. When the file gets changed, we can just re-run it and the values will get updated.

Laslty the debugger can also be switched on to jump to exception when they occur and get access to the pdb shell:

Other than the magic functions, IPython also provide an automatic identation of the code which Python Shell doesn’t provide. Meaning that when creating classes or functions, it will automatically indent the next instruction allowing us to avoid inputting spaces ourselves.

Another difference with the Python Shell is that IPython groups together in a clear manner the full command input and allows navigation back to input with up and down arrow. sIf we build the some_func definition, and press up, the whole definition will be suggested, in contrast to the Python shell which would only suggest line by line. 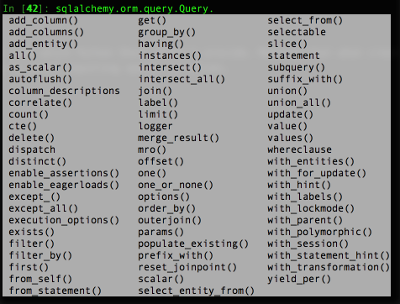 The history functionality of IPython exposes the same behavior as the history of bash. CTRL+R can be used to search in history with suggestion, while repetitive CTRL+R will browse through the suggestions. Combined with the fact that IPython understands the composition of classes and definitions, it will suggest the whole implementations of classes which is very handy.

Another nice history management feature is provided by saving each input and ouput and making them available in the global scope respectively through _i and _.

Lastly if we wish to run Python script prior the shell run, like how we would do settings the PYTHONSTARTUP, we can put them in under ~/.ipython/profile_default/startup/. Scripts are ran in alphabetical order therefore the README added by default advises to prefix scripts with a number to control the order.

Today we saw how we could explore and quickly code Python scripts using the Python shell. We started by looking at two of the fundamental functions to discover features, dir and help. We then looked into inspect which provides more advance features to dig deeper in a codebase. Lastly we looked at another implementation of the Python Shell called IPython which comes equipped with a lot of good functionalities like history management, autocompletion, and even magic functions making it very easy to work with Python within the shell. I hope you liked this post and I see you on the next one!