Profiling With Cpu Sampling And Speedscope

There are a lot of profiling tools around but majority of them require code change. Code change means rebuilding and redeploying the application.

py-spy takes a different approach and provide profiling via capture of CPU samples by reading directly the memory of the Python program. It can sample running process by providing a pid or sample scripts. py-spy can be install via pip:

and for recording CPU samples we use record:

Let’s start first by creating a program to demonstrate how it can be used:

Without looking into details of what the program does, we can extract the CPU samples from this program mb

By recording the program, we get the following flamegraph:

Flamegraph allows us to see the most common code-paths and how CPU is being consumed. Here py-spy produce an icicle graph read from top to bottom, as opposed to flamegraphs which are read from bottom to top. For the rest of this post we’ll continue to refer to it as a flamegraph as it’s basically just reversed a flamegraph.

When reading a flamegraph, the following points are important to understand:

Then from the previous flamegraph, we can start by looking at the tip of the icicles:

Highlighted with the purple bars, we find where the CPU is being used and we can easily identify test_three as a hot path. This means that any improvment on test_three would yield the highest result since it’s the function consuming about 80% (all test_three frames combined) of the CPU time.

The flamegraph also allows us to understand how the program runs, by looking at each icicle with the depth, we can deduce the following:

If we now compare what we read from the flamegraph, we can follow along the myprogram.py and verify that the call stack can be retraced.

So what we have seen so far is that a flamegraph allowed us to identify hot paths and understand how a program ran without prior understanding of the code.

By using --format speedscope we get a json file.

Speedscope is a web-based viewer for performance profiles. It runs smoothly on the browser and allow navigation across megabytes worth of stack frames.

We can install it locally via npm:

Then simply run speedscope to launch it. 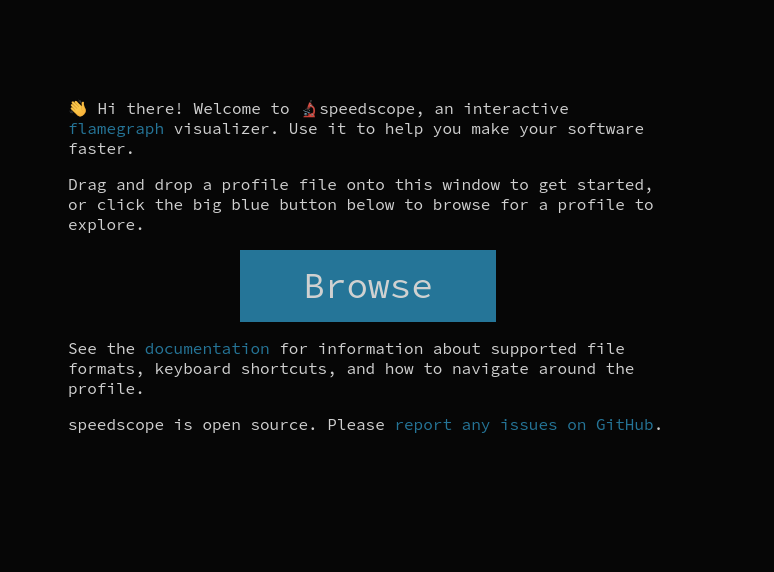 From the main page, we can upload the profile.speedscope.json that we recorded.

Speedscope provides an alternate view to flamegraph we seen earlier. Here we have access to three views:

Here we can explore what was put onto the stack and how the functions were called. This is ordered by time passed hence for regular applications, it will be quite dense - but parts would be repeated as usually application paths are called again and again in the same fashion. The top timeline allows us to zoom on specific parts, we can also double click on a frame to zoom on it.

The Left Heavy view is closer to a flamegraph which does not respect the time passed but instead merge stack frames that can be merged and order them from largest to smallest from top to bottom:

This allows use to identify quickly what frames are taking time by reading from left to right.

And lastly the Sandwich view:

From here we can sort by time consumed for the frame itself or combined frames and when clicked on the frame we get the view of the callers and callees.

Today we looked at how we could profile a Python application with py-spy to identify hot paths. We initially saw how we could produce and read a flamegraph using py-spy, and we then moved on to look at how the profile could also be analyzed using Speedscope, a free and open source web-based tool. I hope you liked this post and I see you on the next one!